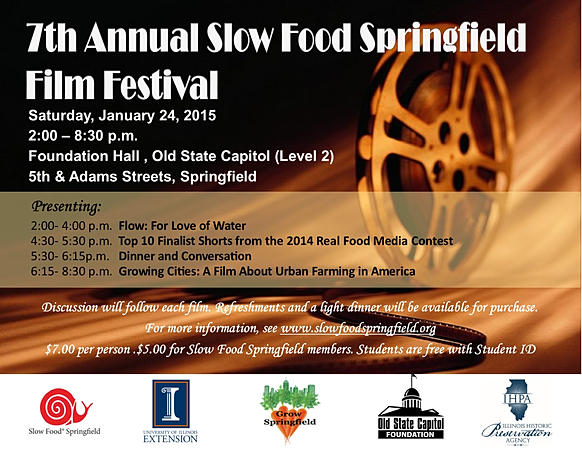 A film festival for everyone interested in learning about and supporting local food systems is planned for Saturday, January 24, 2015 in Foundation Hall at the Old State Capitol (Level 2) in Springfield from 2:00 – 8:30 p.m.Slow Food Springfield, University of Illinois Extension, Illinois Historic Preservation Agency, Old State Capitol Foundation and Grow Springfield are partnering to present the 7th Annual Slow Food Springfield Film Festival. “These films tell the stories behind our food and can increase awareness and interest in our food system,” says Deborah Cavanaugh-Grant, Local Food Systems and Small Farms Educator, University of Illinois Extension and chair for the festival.

The festival will feature two films, Flow: For Love of Water and Growing Cities: A film about urban farming in America as well as the Top 10 Finalist Shorts from the 2014 Real Food Media Contest.

Irena Salina’s award-winning documentary investigation into what experts label the most important political and environmental issue of the 21st Century – The World Water Crisis. Salina builds a case against the growing privatization of the world’s dwindling fresh water supply with an unflinching focus on politics, pollution, human rights, and the emergence of a domineering world water cartel. Interviews with scientists and activists intelligently reveal the rapidly building crisis, at both the global and human scale, and the film introduces many of the governmental and corporate culprits behind the water grab, while begging the question “Can anyone really own water?” Beyond identifying the problem, FLOW also gives viewers a look at the people and institutions providing practical solutions to the water crisis and those developing new technologies, which are fast becoming blueprints for a successful global and economic turnaround.

The Real Food Media Contest was the first ever national competition to celebrate short films on sustainable food and farming. In 2014, the first call for submissions was sent out and they received 150 entries featuring stories from 19 countries.  A team of three award winning judges had the tough task of choosing the Top 10 with all the winning films bringing to life the diversity of the movement for healthy and sustainable food.  The Top 10 list includes:

Growing Cities is a film about urban farming in America. At a time when so much negative attention is paid to the food system—from mad cows to factory farms—this film tells the inspiring stories of city-dwellers who are transforming their communities one vacant lot, backyard beehive, and rooftop farm at a time. Along the way these growers show that the urban farming movement is about a whole lot more than simply food and that everyone can take part in creating a healthier, more just, and sustainable food system.